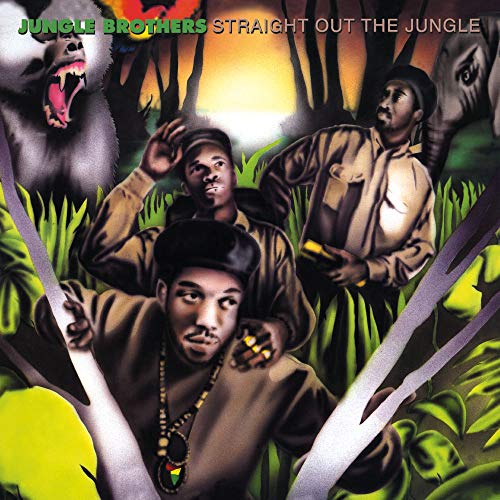 “Straight Out The Jungle”, the emerging philosophy of the Native Tongues

The tragedy of the forgotten classics

With the passing of time, we tend to forget, and sometimes even denigrate, the impact of some albums and the influence they had on the rest of the musical genre by inspiring all future achievements. Here, we are talking about a Hip Hop album, which, like many, has been forgotten over the years in the long history of Hip Hop that is getting longer every day. After all, it is natural, after more than 30 years, the spotlight shines on something else. But that doesn’t mean we shouldn’t pay tribute to these forgotten albums and acknowledge their influence.

Straight Out The Jungle falls directly into this category, as forgotten as it is denigrated today. While other albums have managed to hold their own over time and retain classic status, some have suffered a much more tragic fate. However, the Jungle Brothers’ first album had an unprecedented influence on the rest of Hip Hop, as did Eric B. & Rakim’s Paid In Full, Boogie Down Productions’ Criminal Minded, N.W.A.’s Straight Outta Compton, EPMD’s Strictly Business. In fact, the years 87 and 88 were the real spearheads of the new generation and contributed to give Hip Hop the new flavors of the 90s, with all the innovations they could bring to Hip Hop. If I talk about it often, it’s because we tend to forget it too much today.

The precursors of a movement

The impact of the Jungle Brothers is unprecedented. They first paved the way for the Native Tongues, bringing this playful philosophy, with a dose of humor and casualness that takes you right back to the beginning of Hip Hop. But they did it differently, with an Afro-centric twist that they almost pioneered. De La Soul, A Tribe Called Quest or Brand Nubian will continue on this way with a style that belongs to them respectively, even more playful to reach a hippie philosophy for the first one, more philosophical and afro-centric for the second one and more activist for the third one.

But this is only a few examples that they could influence, Intelligent Hoodlum a.k.a. Tragedy Khadafi, Main Source or KMD are also part of this list. It is also one of the first conscious rap albums along with their colleagues Public Enemy and N.W.A. who took a much more direct and aggressive direction.

Contrary to some of their compatriots of the time like Rakim, EPMD or LL Cool J who were more busy bragging, they will also propose a more serious content while keeping this comic side with a touch of playfulness. Aspect that will tend to disappear over the years in Hip Hop. If they sample mostly Funk, they will also open the way, with other groups, to a selection of samples much more eclectic, including Jazz, without forgetting one of the first fusion between Hip Hop and House on I’ll House You with Todd Terry.

A unique philosophy inspired by the pioneers of Hip Hop

In the philosophy of the Jungle Brothers, the title of the album takes all its meaning. The Jungle refers both to the ghettos but also to their African roots with a return to the sources, a direct reference to the pioneers of Hip Hop who had this desire to bring together the black community while advocating their roots. The pseudo of Afrika Baby Bam is a direct reference to Afrika Bambatta.

The Jungle Brothers carry this duality within them. They are conscious enough to propose an afro-centric content but wise enough not to go into the vulgarity and the clichés of the thug life. Their self-mockery works for them with a sufficiently enlightened message while maintaining a form of lightness, the titles oscillate very skillfully between collective consciousness and braggadocio.

The introduction and eponymous track is the most revealing of their intentions with a short presentation of the stakeholders, Afrika Baby Bam and Mike Gee, accompanied by DJ Sammy B. With a beautiful sample of Mandrill’s Mango Beat guitar riff, the production is raw but uncluttered, and lets the group express themselves wonderfully for a great performance of the two rappers with a hook that takes the iconic line from The Message by Grandmaster Flash and The Furious Five “It’s like a jungle, Sometimes it makes me wonder, how I keep from going under”.

A subtle blend of Afro-centric awareness and playfulness

With lyrics tinged with humor, the group indulges in its mischief, starting with Jimbrowski where they boast about the sumptuousness of their private parts, completely zany but totally hilarious. In the same idea, they self-congratulate on Braggin and Boastin over a little guitar riff from Imprreach The President. Because I Got it Like That, over a Sly and the Family Stone organ solo, refers to the female gender with a seduction of their own. I’m Gonna Do You follows the same path with a very explicit track over a guitar riff by The Meters. On Behind the Bush, Baby Bam and Mike G invent metaphors linked to the jungle to describe the objects of their sexual desires. It’s hard not to mention the improbable Sounds of the Safari which is as cliché as it is amusing with the animal calls scattered throughout the track.

Even though they are more conscious on other tracks, they still retain their comedic edge. On What’s Going On, which naturally covers the Marvin Gaye song of the same title, they talk about the problems of education among black people and urge young people to learn history and beware of the dangers of the street. Black Is Black is one of the first jewels in the crown of Afro-Centric hip-hop, following in the footsteps of their predecessors and primary inspiration, Afrika Bambaata. On On The Run, they relate the hardships of urban life with the impact on family relationships.

Even if they use few jazz samples, the album is impregnated with its sounds and musicality, the Jungle Brothers are indeed the pioneers of the fusion of rap and jazz. The rudimentary productions orchestrated by the group itself propose very sparse drum beats while keeping a very pure form of Hip Hop with a minimalist break beat and some simple and well-chosen samples. The soundscape of the album is intimately connected to the Ultimate Beats and Breaks (UBB), a series of 25 compilations that they massively sampled, especially the drum breaks.

The following year, the group will release Done by the Forces of Nature, an album which takes the same codes as the first one but whose production will undoubtedly delight the new generations a little more than on this first try. Even if the group will continue to release albums in the 90’s and 2000’s, the musical landscape of Hip Hop has taken a less playful and more aggressive tendency making the Jungle Brothers an outdated group by the mid 90’s.

The raw production may turn some people off, yet the group presents major Hip Hop innovations in terms of lyrical content and composition. The trio has composed an album that is a reflection of them with a mixture of Afro-centric awareness, positivity, fun and playfulness while always remaining authentic. They launched groups like A Tribe Called Quest and De La Soul that tragically became more recognized and famous than they did. Jungle Brothers laid the musical seeds for a number of trends that would become dominant for many years. And it’s wonderfully done.